Get up-to-date information on new podcasts, videos and other exclusive content.

TruceTO: one year of harmonizing the streets of Toronto

TruceTO: one year of harmonizing the streets of Toronto

One year ago, we hosted our TruceTO kickoff event at the corner of King Street West and Spadina Avenue in Toronto. Several RSA Canada employees and volunteers worked together to bring awareness to what became a movement on how to improve road safety for all road users, including pedestrians, cyclists and drivers.

How did TruceTO come to be?

As one of the biggest P&C insurers in Canada, our employees witness firsthand the tragic consequences of collisions taking place on our streets every single day. For instance, in 2016 in the City of Toronto, 171 pedestrians and 42 cyclists were killed or seriously injured in a collision with a motor vehicle and 145 drivers were killed or seriously injured due to aggressive and distracted driving. Something had to be done. That’s when TruceTO was born.

There’s no skirting around it: the debate around road safety in Toronto is divisive and heated. But one thing rings true: no one is exempt from the risk of a road incident. That’s why we didn’t take sides; we chose to launch TruceTO and encourage citizens to bring back harmony to the streets between all users: pedestrians, cyclists and drivers included. There’s no doubt that infrastructure changes will make safer streets for everyone but one thing we can all change today is our behaviour. And so, the rally cry for TruceTO was to encourage GTA residents – who drove, walked or cycled – to refresh their knowledge of the rules of the road, and show empathy when they came up against a fellow road user.

The launch of TruceTO marked the beginning of a movement, in the words of key Toronto media. Positive press coverage highlighted our message of creating a truce among the GTA’s road users. Strong support on social media and at the launch event legitimized our cause. Passersby were invited to participate in a driving simulator hosted by DriveWise and take selfies after pledging to be more considerate and informed while on our streets. We were onto something and haven’t stopped since.

365 days later and TruceTO is no longer just about awareness. We’ve added an education component, especially around cyclist hand signals, navigating adverse road conditions and proper intersection management, in collaboration with DriveWise. We’ve launched our podcast StreetPeace in which we talk to key influencers at the forefront of the road safety conversation in the GTA. And we continue to promote TruceTO on social media to keep the movement going strong.

Will you join us? 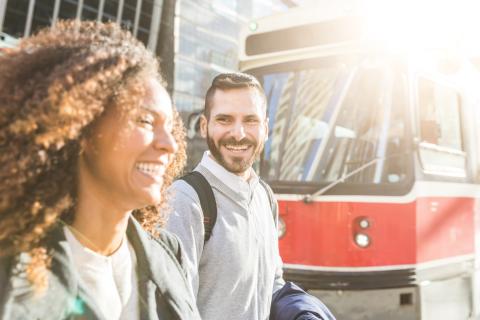